Oh Sonoma, how I love thee, let me count the ways.

If I made about quadruple the amount of money that I make, I would be living on five acres of land in Sonoma right this minute with a farm of dobermans running around me while I’m sipping on bottles of Gloria Ferrer. But back to reality…

I’m not sure how I ended up with a fiance that loves jam bands, more specifically Phish. I think I have pretty diverse taste in music, but I simply can’t get into Phish. I tried…I really did. I went to two concerts with him! My disdain of this band was solidified when someone pooped on the floor in the pavilion at the show I attended this summer. Say what you will about the music I like, but no one is shitting on the ground at concerts I go to. 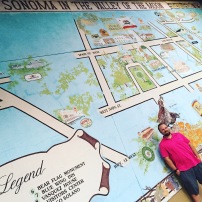 So what does Phish have to do with Sonoma? Well we compromised on Ryan traveling to see Phish in San Francisco with a detour in Sonoma. I get a weekend in Sonoma, then I go home while he stays in the city for three nights of terrible music.

I was pumped to get out to Sonoma, not only because it’s my favorite but because we won two tickets for the Napa Valley Wine Train. If you haven’t heard of it, it’s a 25-mile train track through the heart of Napa Valley. You hop aboard a vintage rail car, complete with dining carts, bars and lounges while enjoying the scenery of the vineyards along the way. 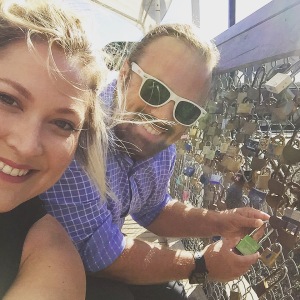 Adding our lock to the bridge.

Before we got on the wine train, we added a lock to the Love Lock Bridge…sappy I know, but it was one of my favorite parts of the whole experience. Thanks to my friend Jana, we had a custom lock to add to the bridge, which connects the train station to the loading platform of the train. We added the lock to the bridge and tossed the key below.

We went on a three hour journey that included dinner during sunset and the views were incredible! We ordered a bottle of wine and were encouraged to explore the train. Each car was different and there were several places perfect for photo opps. It was an Instagram-worthy ride and it took everything in me to not post a gazillion pictures. The whole experience was everything I could have wanted and more…until about 3 am, when I woke up with food poisoning.

Now I’m not necessarily blaming the food poisoning on the wine train, but I definitely was sick from something I ate that day. Let’s just say that the thought of clam chowder still makes me want to vomit. Unfortunately, we were due to check out of the hotel that day and check in to our hotel in San Francisco. WHAT. A. RIDE. THAT. WAS. Our friends in Sonoma loaded me up with Pepto, bread, applesauce and tea, and off we went. It was the longest hour of my life, I just wanted to be back in bed left in peace to throw up in privacy. I was even more bummed because we had a sushi dinner planned with reservations for a speak-easy that I wanted to visit. Needless to say, I stayed in bed at the hotel and watched Housewives reruns. 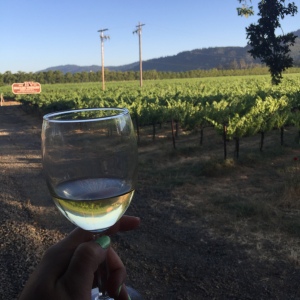 Happier times: enjoying a glass of wine on the Napa Valley Wine Train.

I woke up the next morning still feeling nauseous but I had to go to the airport to catch a flight home. I had upgraded my seat to first class so that I could stretch out and relax, but I was dying a little bit inside knowing I wouldn’t be able to take advantage of the free flowing alcohol during my almost five hour flight. What can I say, I love free booze. I settled in my seat with a couple Moth podcasts downloaded for the flight, and all was good…until the guy next to me ordered lobster mac and cheese for dinner. WHY IS THIS EVEN AN OPTION? The smell was making my stomach churn as I turned towards the airplane window and covered my mouth. I was breathing into my sweatshirt trying to not get another whiff of his meal. I figured that if I had to barf, I would turn towards him and unleash on his lap for ordering the worst possible dinner option.

Luckily for both of us, I made it through the flight without expelling anymore of my insides. And through all of that, Sonoma is still my favorite place. But I promise you that I’ll never be having clam chowder ever again.