Today’s Think Kit blog prompt: “What’s one step you can take to support a goal you have for 2013?”

I started thinking about my goals and resolutions for 2013. Go to the gym more. Eat healthy. Work harder and smarter. Be more financially conscious.

The problem with resolutions is that no one ever sticks to them. It’s funny to read all of the grand proclamations from people at the beginning of January, and then by February it’s as if the resolutions were never made. 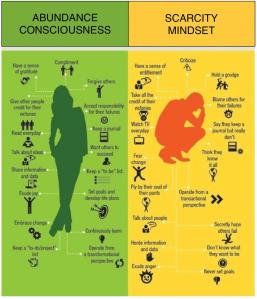 So instead of making resolutions for 2013, my goal for 2013 is simply to be a better person than I was in 2012. As long as I’m trying to better myself, that’s good enough for me. I know that every once and awhile people slip and make mistakes, and that’s okay.

My aunt posted this picture on Facebook today, and I thought it was perfect. My goal for 2013 will be to stay on the abundance consciousness side of this infographic and to stay away from the scarcity mindset. This is the one step I can make towards achieving my specific goals in 2013.

What are you goals for 2013? Have you ever stuck to a resolution and made a lifelong change?

One thought on “Resolve to not make resolutions”