Today’s Think Kit prompt: No screens, no technology – what did you do with your hands this year?

I’d like to say that I have a green thumb, but I can’t even keep low maintenance flowers alive. I’ve tried. We bought the kind that need minimal light and minimal watering…they died in probably less than a week.

This is not to say that my boyfriend doesn’t have a green thumb. He might even have two. Living on one acre of land that is in almost full sunlight has its advantages, such as the luxury of planting a giant garden. We (I say we but I really mean Ryan) decided on six raised beds this year with an old mailbox turned into an herb box. We planted a huge variety of vegetables: tomatoes, different types of lettuce, kale, corn, jalapenos, banana peppers, green peppers, purple peppers, cucumbers, basil, cilantro…the list goes on.

We had so many cherry tomatoes that we couldn’t keep up with picking them, and the cucumbers were growing by the dozen. Our doberman found out that cucumbers were his new favorite food and he would pick them whenever he wanted an afternoon snack. At first it was cute, and hey, it’s a healthy homegrown treat for him to enjoy! But then I tried my hand at making pickles and I wanted all the cucumbers for myself.

Since the cucumbers were growing so rapidly and in abundance, I looked up a few pickling recipes. I started with cucumber salad, a simple recipe of vinegar, cucumbers, onions, dill and some pickling spices. I made a couple mason jars full and put them in the refrigerator for a few days, and then ate them with every meal every day because I loved them so much. 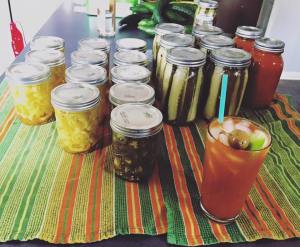 I moved on to making dill pickle spears. I tried a few different recipes until I figured out the perfect combination of vinegar, fresh dill and spices. We were buying mason jars by the dozen and our friends were begging us to bring them to every gathering, dinner party and get-together. Pickles were our thing now and I actually really enjoyed making them. I dabbled a little into pickled jalapenos and peppers, and eventually made some really great batches of Bloody Mary mix (that went great with a fresh dill pickle spear).

While I wasn’t any good at actually growing the cucumbers, or any of the veggies, I had found my place in our garden with the perfect canning recipes.