Today’s Think Kit prompt: What creates a sense of home for you? Explore the space, artifacts or people who shape your habitat. When do feel the most at home? 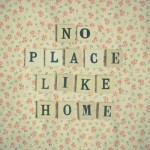 I’ll refer to Edward Sharpe and the Magnetic Zeros for this Think Kit Prompt…”home is wherever I’m with you.”

Not to be ooey gooey mushy lovey dovey, but I just had this conversation with my boyfriend the other day. We’re in the process of getting our house ready to sell (so let me know if you’re in the market to buy!) and talking about where we would go next. I told him that no matter what side of town we go to or what state we might end up in, I don’t care as long as I have him and our dogs.

Home is staying in on a snowy day with hot tea, blankets, Ryan and the dogs binging on a Netflix series. Home is putting technology away for a day and spending quality time outside together. Home is learning new recipes and cooking together. Home is making memories with the people you love that will last a lifetime. Home is about people and memories, not things.

Of course there are some special possessions that I would want to keep with me, including old photos, records and the such. But if someone told me I had one box and one hour to pack and move across the world, I could do it.

I learned to let go of “stuff” when I moved in with my boyfriend. He told me he didn’t have a ton of space for me to bring stuff to his house. So I really took a look at what I needed versus what I was just holding onto. I think if most of us took a look around, we would find that we have a little bit of a pack-rat mentality. There were old wallets, at least 100 writing utensils, old clothes, various tchotchkes and gifts that still had the tags on them that I knew I had to part ways with…and newsflash: I don’t miss any of those things that were gathering dust in boxes. It was the beginning of me understanding that “stuff” isn’t important, it’s the people you surround yourself with in life.